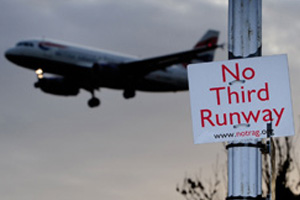 David Tarsh is a strategic adviser to several organisations in the travel industry.  He also lives and works under the Heathrow flight path

It’s clear from recent news that David Cameron realises he’s made a mistake.

He’d forgotten Bill Clinton’s first rule of politics – ‘It’s the economy stupid!’ And in the case of the UK, which is an island, aviation is the economy.

What’s just occurred could have come straight from the script of Yes Prime Minister.

Dave, with increasing recognition that his ‘greenwashed’, no third runway policy is actually damaging UK competitiveness, turns to Sir Humphrey for face-saving advice.

The breezy reply is immediate: ‘Just re-shuffle your cabinet Prime Minister and set up a commission to report after the next election’… and here we are.

The trouble is that the facts have not changed, precious time is being squandered and the answer is blindingly obvious – indeed so simple that it can be expressed in two letters: R3.

The third runway case is overwhelming. Heathrow is full. There is huge demand for slots from airlines all over the world. No other UK airport is so desired.

A hub self-evidently needs runways next to each other and Heathrow already has two, whereas the other serious options currently have one or, being still an architect’s dream, none at all.

Nearly all the undeveloped land required is available right on Heathrow’s boundary.

Expansion won’t cost the taxpayer a penny because private funding is available and the business case is straightforward. It’s a project that will create thousands of jobs.

So what’s the problem? Anywhere in the UK you propose to cite a new runway, let alone a new airport, will bring out armies of NIMBYs (not in my back yarders) and campaigners in open-toed sandals objecting to the noise and loss of countryside.

In Heathrow’s case, there is not that much lovely countryside to be spoilt and there are many measures that could be taken to reduce noise that could easily be implemented, including steeper approach paths and a requirement to operate quieter, cleaner aircraft.

The biggest problem is the politics. I find it particularly interesting that property values under the flight path are among the highest in the world.

That begs the question – how bad really is it to live there? The truth is that it’s not so bad – because if it were, affluent people would have moved long ago.

The issue the NIMBYs have to think about is this. Proximity to Heathrow is desirable because it is convenient for travel and that helps your house preserve its value.

If you stifle the growth of Heathrow, ultimately you will harm the long-term value of your home.

If that is the aim, the things you fear need not happen (more noise and congestion) and at least one thing you want will – an increased value of your home.

The debate needs to become more sophisticated because with the right planning regulation and infrastructure development Heathrow can become much busier without the problems the locals fear.

Re-framing the question, with a focus on achieving stringent environmental safeguards and proper compensation for the few that will need to be relocated as the trade-off for Heathrow expansion, has to be the way forward for the new transport team and the independent commission.