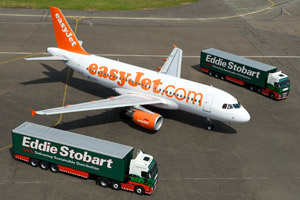 EasyJet today gave a confident forecast after delivering a 27.8% rise in annual pre-tax profits to a record £317 million.

The budget carrier saw passenger numbers grow by 7.1% to 58.4 million in the year to September 30.

Chief executive Carolyn McCall said: “These results demonstrate that easyJet is a structural winner in the European short-haul market against both legacy and low-cost competition.

“The strength of easyJet’s business model and strategy coupled with the hard work and dedication of the easyJet team has delivered record profits as well as a significant increase in returns for shareholders during the year.”

She revealed that the board was raising the dividend paid to shareholders from 10.5p to 21.5p which will result in a payout of £85 million in dividends.

This was “evidence of confidence in easyJet’s current position and future prospects,” she said.

McCall added: “Whilst there is always the potential for unexpected events to temporarily impact financial results, the board of easyJet is confident that its business model, strategy and people will consistently continue to generate superior returns and growth for shareholders.”

The airline repeated concerns over taxes imposed on airlines in Europe.

“EasyJet remains concerned with the continual increase in taxes on aviation across Europe, which is undermining European growth and ultimately jobs,” the company said.

“EasyJet has undertaken work to demonstrate to governments that these taxes are not in their interest or those of consumers or people working within the sector.”

The carrier, which is introducing allocated seating across its network from November 27 following a trial, said it was now the third-most-searched-for airline globally with almost 400 million visits to its website over the last 12 months.

More than half of those of visitors originated from outside the UK.

“Weaker competitors have retrenched and there are clear opportunities for profitable growth, thus easyJet will grow overall capacity in seats flown by around 3.5% in the first half of the year,” the annual results statement said.

“Full year capacity growth is expected to be at a similar level to the first half of the year.”

Forward bookings for the first half of the 2013 financial year are “broadly in line” with the past year and around 45% of winter seats are now booked.

“The challenges faced by easyJet are shared by all European airlines but easyJet’s leading European network and cost advantage combined with a disciplined approach to use of capital means that easyJet is well placed to continue to make travel easy and affordable for customers and to continue to generate returns and growth for shareholders,” the airline said.

EasyJet revealed that it is working in partnership with GDS providers and travel management companies to improve technology to make the booking functionality for third party agents easier.

It expects these improvements to be completed in mid-2013.