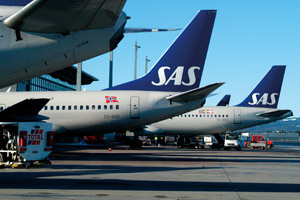 Eight unions backed wage cuts and changes to working schedules and pensions after talks missed a Sunday deadline and continued through the night.

The company’s shares soared on the deal after media speculation that the airline could have faced bankruptcy if the talks had failed, Reuters reported.

SAS, half owned by the governments of Sweden, Denmark and Norway, last week said it would slash overall staffing by about 40% to 9,000 by shedding assets, reduce the workforce by a further 800 with job cuts and cut some salaries by up to 17% to get new financing from banks and its main owners.

But the Scandinavian carrier still faces low fare competition from Ryanair and regional rival Norwegian Air Shuttle, both of which have lower operating costs.

SAS chief executive Rickard Gustafson admitted: “These were very big sacrifices and a great amount of responsibility from the unions. We now have a plan for long-term profitability. We have built a strong base,” he added.

The Danish Pilots Union still has to hold a ballot of members in which one third have to agree to the cost-cutting deal.

An SAS spokeswoman said the airline viewed the vote as a technicality which would not prevent the deal going ahead. SAS expects a result in the next few days.

SAS needed to get agreement from all eight unions as a condition of a 3.5 billion Swedish crown (£325 million) loan from its shareholder governments and seven banks.

Espen Pettersen, deputy leader of the main Norwegian cabin union, said: “It has been a very gruelling process. We have made big concessions in this agreement. We are not very happy, but we felt we had no other choice but to sign to secure the jobs and the company.”

SAS told crews on Sunday to ensure aircraft were fully fuelled to be able to return home if needed. The airline was also giving cash to flying staff to ensure they could get access to hotels in case of bankruptcy.