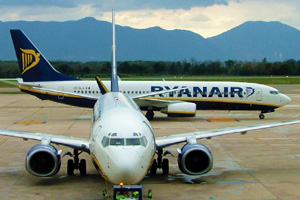 Ryanair has been forced to defend its safety record again following new claims that pilots are put under pressure to keep costs down by flying with as little fuel as possible.

The airline had previously hailed a report from the Irish Aviation Authority which exonerated it from flying with too little fuel after a succession of emergency landings in Spain.

But a report on The Sun website has rekindled the debate after a Dutch television show claimed to have four Ryanair pilots speaking anonymously about safety issues.

One of the pilots is reported to have said: “There is pressure put on crews to take as little fuel as possible, in order to save money for the company.”

The Sun report included a typically fiery response from Ryanair boss, Michael O’Leary, who said: “They are quoted anonymously, because what they are telling you are lies.”

Meanwhile, a spokesman for the airline added: “These claims have no validity and originate from a Dutch TV programme which featured anonymous contributors in darkened rooms.

“The reason these anonymous contributors did not want their identities revealed is because there was no truth to their claims.”

Ryanair said pilots were allowed to take as much fuel as they wished, which in all cases was more than the minimum reserve amount.

And the carrier also confirmed it had issued defamation proceedings against The Sun following the article.

Although the earlier report from the Irish Aviation Authority cleared Ryanair of flying with too little fuel, two of the report’s three recommendations required the airline to review its procedures and training.