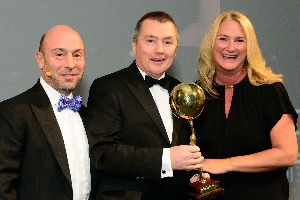 Walsh (pictured right with Travel Weekly chairman Clive Jacobs and Lisa McAuley of Avis) was a pivotal figure in the merger between British Airways and Iberia in January 2011. Before that, he achieved record results with both Aer Lingus and British Airways.

He said: “To be recognised by your peers is always great, I’m delighted. The industry is always going to be challenging, but there are some indications the economic situation is improving and I think it will be a good year for the industry.”

Walsh used the opportunity to reassert his faith in the Dreamliner after the aircraft ran into a series of technical problems this week.

“It’s always a concern when you see technical problems, but with brand new technology it’s not unexpected. I have complete confidence in Boeing.”

Stanley Tollman, chairman of The Travel Corporation, was the recipient of the first global Lifetime Achievement Award presented in association with the World Travel and Tourism Council.

Tollman, who was born in South Africa, subsequently moved to the UK where he built a company which now owns brands including Trafalgar, Insight Vacations, Contiki Tours, Red Carnation Hotels and Uniworld Boutique River Cruises.

The company employs 4,500 staff on six continents and has donated more than $2 million through its sustainable travel charity.

He said: “It is incredible to get this recognition. You struggle along day after day and year after year and suddenly something like this happens. It makes you feel that you have really achieved something. All our markets are up at the moment and we’ve had a wonderful start to the year.”

Based in Sedgley in the West Midlands, Tracy Burden demonstrated how the relationship between a quality travel agent and their customer so often transcends mere transactions.

Tracy visited a critically-ill client every day in the run-up to her death, receiving training to administer injections.