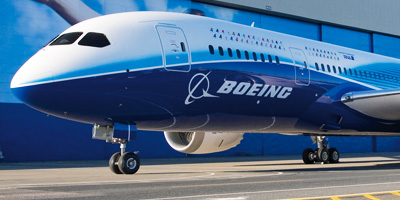 All 50 Boeing 787 Dreamliners have been taken out of service on a temporary basis amid safety concerns.

The US and European aviation agencies said aircraft should be grounded while safety checks are carried out on their lithium ion batteries.

There are concerns that the batteries could leak, corroding vital equipment and potentially causing fires.

Boeing said it stood by the integrity of the Dreamliner, which has been in service since October 2011 and is due to be delivered to Thomson Airways and British Airways in May.

The European Aviation Safety Agency yesterday endorsed an airworthiness directive put out on Wednesday by the US Federal Aviation Administration saying that airlines must demonstrate battery safety before flights can resume.

Boeing chairman, president and chief executive Jim McNerney said: “We are confident the 787 is safe and we stand behind its overall integrity.

“We will be taking every necessary step in the coming days to assure our customers and the traveling public of the 787’s safety and to return the airplanes to service.

“Boeing deeply regrets the impact that recent events have had on the operating schedules of our customers and the inconvenience to them and their passengers.”