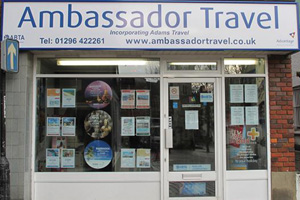 Staff at a failed branch of Ambassador Travel could hardly believe their luck when one of their most loyal customers stepped in to save their jobs.

The five-strong team at the shop in Aylesbury, Buckinghamshire, lost their jobs when the six-branch Ambassador Travel chain collapsed last month due to cashflow problems.

But the shop, which is more than 100 years old, is now up and running as an Advantage Managed Services agency under its original name Adams Travel after retired businessman Stan Lisowski, who has been a customer for more than 20 years, bought the agency “for sentimental reasons”.

Two of the original staff – the manager and assistant manager – are jointly running the agency after two weeks out of work.

Georgina Proverbs, formerly manager of the Ambassador store, said: “If you were told someone would do this in this day and age you wouldn’t believe it. I cried when I heard. It was one of those moments when I thought there are still nice people in this world.”

It was Georgina’s phone call to the customer following the collapse of the six-strong chain that prompted the acquisition.

“I rang to tell him his holiday was fine and what had happened. He said he was going to ring the landlord as soon as we finished the call, and it snowballed from there,” she said.

Just 18 months ago, the same customer missed a chance to buy the branch when it was sold to Ambassador Travel.

Former assistant manager Caroline Johnson, now jointly running the branch, said: “At the time that Adams Travel, as it then was, was up for sale he said he would have liked to have bought the agency.

“Now, without him we would not be up and running.” The new owner held talks with staff, insolvency practitioner Michael Durkan and the Advantage consortium to reach a deal.

“We were in and out of talks,” said Johnson.

“We now have more control than before. It was a huge thing for us to do it and we have to make it work.

“Nothing has changed from the customers’ point of view. They knew us as Adams Travel as the agency has been around for more than 100 years.”

The new owner is acting as a silent partner and trusts the staff to keep the agency running.

“We want to repay him and make it a success. We are working for someone who trusts us implicitly,” added Georgina, who is in the process of employing a third member of staff.