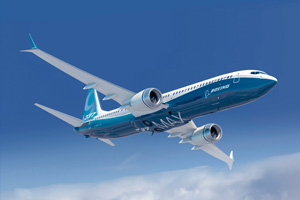 Europe’s largest travel group is to order 60 Boeing 737 MAX aircraft worth £4 billion with options on a further 90 of the narrow-body type.

The 737 MAX aircraft utilises a new-technology engine type claimed to result in a 13% improvement in fuel efficiency and a 40% reduction in noise over today’s main competitors.

The new 737s will provide lower per seat costs than current-generation aircraft, according to Tui.

Around 80% of the group’s passenger flew on 114 narrow-body aircraft across six airline brands including Thomson Airways in the last financial year.

“In order to maintain cost competitiveness and support Tui Travel’s aim to minimise the environmental impact of its activities, the existing narrow-body aircraft will need to be replaced in the next decade,” the company said.

“The proposed transaction will ensure that the group has sufficient aircraft to fulfil its long-term plans and that the expected accrued value justifies the cost of the purchase.”

Chief executive Peter Long said: “A major part of Tui Travel’s strategy is to provide our customers with unique holiday experiences they can only get from us.

“This multi billion-pound investment in the B737 MAX – representing the future generation of more fuel-efficient aircraft for our short and medium-haul programmes – will be a further driver in delivering this.

“It comes as the first of our Boeing 787s touches down in the UK to commence replacement of our long-haul fleet with best-in-class aircraft.

“We are leading the way in redefining mainstream holidays, and putting our customers at the heart of everything we do is integral to our continued growth.

“I can confidently say that being able to offer our customers the most advanced, comfortable aircraft, whether they are travelling with us to short or long-haul destinations, while reducing our environmental impact, will only strengthen our position.”

Thomson Airways’ first Boeing 787 Dreamliner is due to arrive at Manchester airport this morning. It has flown from the Boeing Everett Factory in Seattle and will be followed with the delivery of a further three Thomson 787 aircraft this summer.

View a timelapse video of the Dreamliner’s production