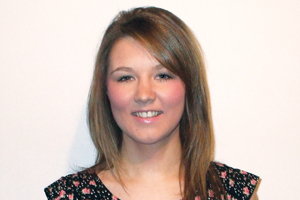 A 23-year-old agent whose shop was earmarked for closure secured a future for her and her team when she phoned the chief executive of Midcounties Co‑operative Travel to ask for a job.

Charlotte Hughes (pictured) and her colleagues were told in January that their branch of Midlands Co-operative in Stafford, which was in a department store, was to close in April.

The department store was one of four Midlands Co-op fashion and home stores to be shut due to “substantial losses”.

Hughes, who had worked in the shop for six years, said: “My colleagues used to work for Midcounties and said how good it was. I wasn’t sure who to speak to so I just went right to the top.

“I explained that our store was closing and said we’d love to work for you, could you find a place for us at Midcounties?”

Midcounties Co-op Travel chief executive Ben Reid was so impressed, he put Hughes in touch with Sue Reid, general manager for distribution, and Alistair Rowland, general manager, who went to Stafford to meet Hughes and her colleagues.

Impressed by the team’s experience, Midcounties decided to open a shop  in Stafford. It has now found a site in a former delicatessen and, after a refit, will open in August.

The shop will be staffed by Hughes, her colleagues Phyllis Woodsford and Kerry Sparrow, as well as a new manager.

Reid said: “The shop is near a Thomas Cook, another Co-op Travel and Thomson, but we feel we have the best team and their customers will follow them. Some of the staff have more than 20 years’ experience.

“It’s so great that this young agent rang up the chief executive and said ‘we want to work for Midcounties’.”

Hughes added: “Working in an area with so much competition is a bit of a challenge but I’m sure we’re up to it.”

Meanwhile, Midcounties is still hoping to buy five of the 192 Thomas Cook Group shops for sale. They are Cook outlets in Great Missenden and Market Harborough, and Co-op stores in Hucknall, Uttoxeter and Chelmsley Wood.