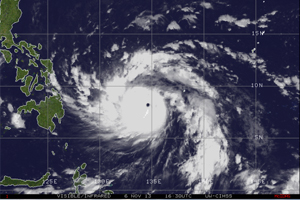 Tropical Storm Haiyan, which is believed to have killed 10,000 people as a typhoon in one Philippine city, has made landfall in Vietnam, close to the border with China.

Despite being downgraded from a typhoon, it still brought gusts of up to 98 mph as it blew in close to the tourist destination of Ha Long Bay.

China issued a typhoon alert for the holiday island of Hainan, Guangdong and Guangxi after Haiyan’s path changed.

More than 13,000 people were evacuated from the major tourist resort of Sanya on Hainan. At least 200 flights at Hainan’s airports were reported to be cancelled or delayed.

The Philippines suffered from sustained winds of 147mph, with gusts of 170 mph over the weekend. Waves as high as 45ft accompanied up to 15.75 inches of rain in places were reported.

The city of Tacloban was flattened by the storm and as many as 10,000 people are thought to have perished there.

A further 300 have been confirmed dead in the country and 2,000 more are missing.

The Foreign and Commonwealth Office said: “The major population centres of Manila and Cebu City were not badly affected.

“There has been severe damage in the worst-hit regions. Travel and communications infrastructure have been severely disrupted.”

And the Foreign Office warned: “It is difficult to travel to or contact these areas and the disruption is expected to continue a number of days at least.

“British nationals in the affected regions should continue to follow the advice of local emergency authorities and should please let their family and friends know they are OK as there has been considerable media coverage of this typhoon.”

It added: “Weather system Haiyan is affecting northern Vietnam. You should monitor local news, follow the advice issued by the Vietnamese authorities and take sensible precautions.”

The typhoon has decreased in strength from the Category Five storm that swept through the Philippines in a day, causing mass devastation and prompting a mass international relief effort.

It is now classified as a severe tropical storm with the main threat coming from severe rain.