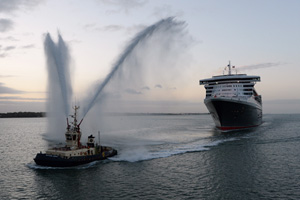 Cunard’s fleet of three ships arrived in Southampton on Friday morning ahead of the tenth anniversary celebrations of its flagship, Queen Mary 2.

The three Cunard ships are rarely seen in the same place at the same time, but this morning’s event marks the third time it has happened in Southampton.

Plans for today include a reception and lunch in the presence of the Duke of Edinburgh, and a ten-minute firework display from 10pm.

Queen Mary 2 will then lead the three ships down the Solent before embarking on a transatlantic crossing.

Queen Elizabeth will sail on a short break to Hamburg and Queen Victoria will head for the Baltic capitals.