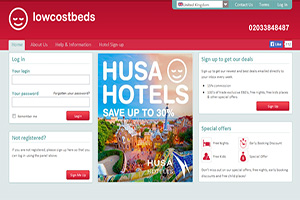 Bed bank Lowcostbeds claims to have taken strides in taking seasonality out of its business by growing in international markets.

The Swiss-based supplier, which was previously founded and based in the UK, has reported an 80% increase in international business for the financial year to October 31, 2014.

The firm, which is marking its 10th birthday this year, also claimed that 65% of its two million customers now come from outside the UK. However, growth has continued in the UK with trade sales said to be 30% up year on year. The UK remains Lowcostbeds largest market accounting for 35% of sales.

Speaking as this year’s World Travel Market in London got underway, Paul Evans, chief executive of Lowcostbeds, said: “We are now one of the top five global bedbanks – with plans for further growth.

“We are on the way to removing the seasonality from our business which gives us a much stronger platform as we invest further in securing key global hotel contracts.

“In 2014, we have seen significant growth in Latin America, where we are now established as one of the top wholesale accommodation only companies.  Further growth next year is expected to come from Europe, the Middle East and APAC.”

Evans added: “We now have 50 buyers and market managers, located globally across 10 offices and we will continue to invest in more inventory, management and global distribution connectivity, as we build a truly global footprint.

“In 2015/16 we will increase that number further to over 30,000 directly contracted hotels, as we add global chains to complement our exclusive leisure product.

“Using channel managers and our extranet tool will accelerate our hotel growth which is vital in the global marketplace where we offer a large range of directly contracted hotels, with up to the minute availability.”