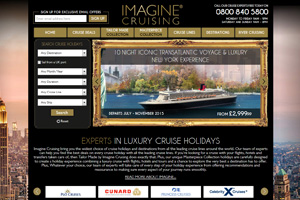 Dnata Travel has won the green light to complete its acquisition of a majority stake in Imagine Cruising.

The deal was first announced in March for dnata to take 51% of the specialist cruise retailer as part of an expansion of its UK travel interests.

The Imagine Travel agreement was subject to regulatory approval in South Africa where both companies have travel interests.

The Competition Commission of South Africa yesterday gave the thumbs up for dnata’s purchase of the shareholding in Imagine Cruising for an undisclosed sum.

The agreement came ahead of Imagine Cruising-sponsored football club Swindon Town appearing at Wembley Stadium in the League One play off final against Preston North End on Sunday.

Managing director, Robin Deller, said: “This week we are celebrating both the completion of our deal with dnata and Swindon Town going to Wembley.

“As sponsor, we are taking our whole Imagine team to Wembley to cheer them on.

“Both of these events are exciting for all of us at Imagine – and taking 80 of our staff to Wembley on Sunday is a chance to thank them for all they have done in supporting our growth and success to date.”