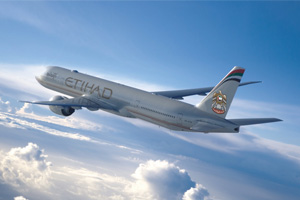 Etihad Airways is extending its reach in Asia through an expanded codeshare with Hong Kong Airlines.

The UAE carrier starts a daily service between Hong Kong and Abu Dhabi today (Monday), offering 3,620 seats a week with an Airbus A330-200 aircraft.

The airline will also codeshare on Etihad Airways’ new service between Abu Dhabi and Madrid.

Etihad Airways increases the frequency of its Bangkok service from three to four flights a day from July 1, with Hong Kong Airlines also codesharing on the additional flight.

Kevin Knight, chief strategy and planning officer for Etihad Airways, said: “Our codeshare agreement with Hong Kong Airlines was initiated last year with a primary focus on enhanced connectivity between Asia and the Middle East.

“The expanded codeshare will result in further commercial success for both airlines, and more importantly unleash the true benefits of the partnership by offering business and leisure travellers enhanced connections and a more frequent service between Asia, the Middle East and Europe.”

Hong Kong Airlines commercial director, Li Dianchun, said: “We are glad to strengthen the partnership with Etihad Airways through a codeshare expansion.

“There is an increasingly strong demand in Asia for travel to the GCC region, Europe, Africa and South America. The enhanced connectivity will enable our passengers to enjoy a wider range of choices while experiencing the world-class services and products offered by both airlines.”