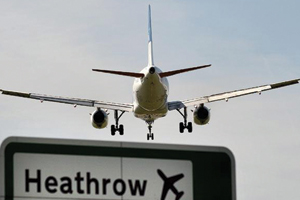 Business and political leaders will today urge ministers to table a Parliamentary vote to give green-light to a new runway at Heathrow.

They will call on the government to fast-track a decision to build a third runway “to protect and enhance the UK’s economic competitiveness”.

This morning’s meeting in Westminster is being staged to put pressure on the government to act on the Airports Commission’s final report which was published in July.

‘After the Airports Commission: what next for airport expansion?’ is being organised by campaign group Let Britain Fly.

A new advertising campaign ‘Clear Britain for Take-Off’ is being unveiled to highlight the economic benefit of expanding Heathrow.

More than 100 people have confirmed their attendance at the breakfast briefing including business leaders, MPs and Peers.

Prime minister David Cameron said at rthe time of the publication of the Airports Commission’s findings that the government would decide whether to accept the commission’s proposal “by the end of the year”.

Let Britain Fly wants to ensure a Parliamentary vote to build a new runway at Heathrow to take place by July 2016 at the latest.

However, all Conservative members of the London Assembly voted against Heathrow’s expansion yesterday, following a question and answer session with Airports Commission chairman Sir Howard Davies.