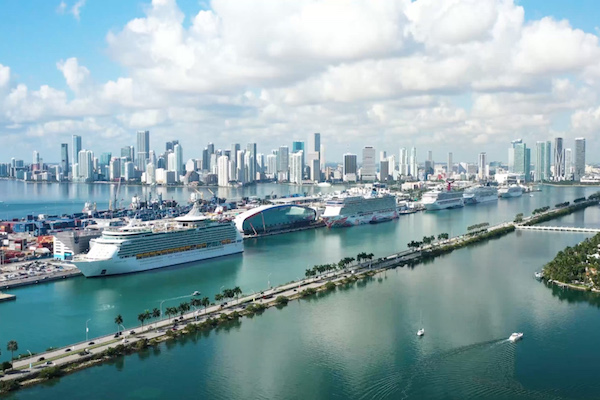 Travel industry leaders have backed planned legislation put before the US Senate to revoke a ban on cruises sailing from ports in America.

Republican senators from Florida and Alaska – which both rely heavily on the cruise industry – put forward a bill designed to revoke the Centers for Disease Control and Prevention’s regulation and allow cruises to return no later than July 4.

The Cruise Act – Careful Resumption Under Improved Safety Enhancements – calls for the removal of the current Conditional Sailing Order (CSO) and require the CDC to provide Covid-19 mitigation guidance for cruise lines in order to resume domestic operations.

The Act was introduced by Republican senators Rick Scott and Marco Rubio of Florida and Dan Sullivan of Alaska.

The bill would establish a working group involving the US government departments of transportation, homeland security and commerce together with industry representatives to develop a new set of cruise sector recommendations.

The legislation demands that the CDC revoke the CSO by July 4 and “any other order or regulation that prohibits the operation of all cruise ships in United States waters.”

It says the CDC must issue recommendations by June 1 for “how to mitigate the risks of Covid-19 introduction, transmission and spread among passengers and crew onboard cruise ships and ashore to communities”.

The bill states that the cruise industry is the only segment of the US economy that is “completely prohibited from operations by the CDC due to Covid-19. For every other sector of the economy, CDC provides recommendations for how to mitigate the spread of Covid-19 without issuing orders to prohibit operations”.

Scott said: “The CDC’s refusal to properly address this shutdown is wrong, and it’s time to get the cruise lines open safely.

“Our bill, the Cruise Act, says we’re not waiting on the CDC any longer. Cruises can and should resume, and we’re going to do everything we can to bring back our cruise industry safely.”

Sullivan added that “unlike the airlines, rail and other modes of transportation – and all other sectors of the hospitality industry, for that matter – the cruise lines have been denied clear direction from the CDC on how to resume operations.

“The foot-dragging, mixed messages and unresponsiveness of CDC leaders is totally unacceptable and ultimately endangering the livelihoods of hundreds of thousands of Americans and the hundreds of small businesses across Alaska that rely on the tourism sector.”

Travel industry executives called for passage of the bill along with a roadmap for reopening all travel during the first hearing of a newly formed Senate sub-committee on tourism, trade and export promotion.

US Travel Association public affairs and policy executive vice president Tori Barnes said: “We really believe no sector of the travel industry should be unable to reopen.”

Cruise ships in a normal year bring 13 million travellers to US ports, and that one job is created by every 30 cruise ship passengers.

“That’s a significant contribution to the US economy. We need there to be clear guidelines so we can reopen [cruising] again this summer,” she said.

Barnes also called for a plan to quickly establish “public health corridors” between the US and other low-risk countries like the UK, avoiding quarantine on arrival, to restart international travel.

This is the third bill introduced to Congress in an effort to resume cruises which have been blocked in the US for more than a year.

Leading cruise companies, led by Norwegian Cruise Line Holdings and Royal Caribbean Group, havce been lobbying for the resumption of US cruises from July 4.