More than 25,000 people around the world tuned in to the event to watch Dame Irene perform her duty as godmother on Sunday evening.

The event prompted tourism minister Nigel Huddleston to say on Twitter: “Some of my favourite family holidays have been on cruises and I can’t wait to go again – so I was delighted to be invited to the virtual naming ceremony of P&O Cruises’ new ship, the Iona.”

After launching the agency in 1980, Dame Irene’s husband John, who died suddenly in November last year, grew Hays Travel to become the largest business of its kind in the UK.

P&O Cruises president Paul Ludlow said the couple were “saviours” for the way they stepped in and bought the Thomas Cook retail network after its failure in 2019.

Ludlow said: “In a year when our business, similar to many others, has faced challenges like no other, it is fitting that Iona’s godmother is someone who has shown support and fierce passion for the travel industry for over 40 years.

“Together with her husband John, they created Hays Travel and established it as the UK’s largest independent travel agency.

“In 2019, they were rightly hailed as saviours when they stepped in to save over 2,500 jobs for young people as they rescued Thomas Cook’s travel retail business.

“Throughout the past year, she has been the voice of reason, thoughtfulness and spirit as she spoke out to recognise the gravity for the travel industry. It gives me great personal pleasure and pride to introduce Iona’s godmother, Dame Irene Hays.”

In a video address shown to thousands of viewers watching the virtual ceremony, Dame Irene said: “There are not many industries where you are able to deliver people’s dreams and that is what we do in the travel industry.

“We’ve always been passionate about young people and the contribution that they can make at Hays Travel and in society in general.” 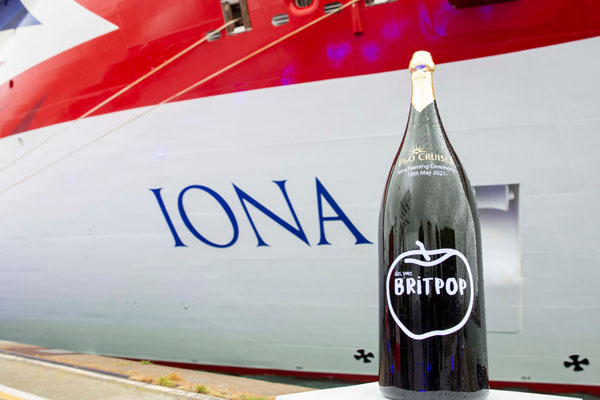 A bottle of cider (pictured), produced by Blur bassist Alex James, was smashed against the side of the 5,200-passenger ship to bring it good fortune.

The ceremony was hosted by radio DJ and television presenter Jo Whiley ahead of a historic week for the UK cruise industry with sailings in domestic waters allowed from May 17.

Take That star Gary Barlow performed two of the band’s songs – Greatest Day and Rule The World – in his role as music director of Iona’s music venue 710 club.

The ship, described by the line as “Britain’s largest and most environmentally-friendly” vessel, arrived at the port of Southampton on Sunday morning ahead of the ceremony.

Iona, which is powered by liquefied natural gas, will sail its maiden voyage on August 7 to Scottish islands including Iona.

Prices for the seven-night sailing lead in from £949. The ship will operate a range of round-trip sailings out of Southampton throughout the winter.

Hours before the naming, Ludlow said: “It is a landmark day for both P&O Cruises and for the travel industry as a whole.”

Last week, MSC Virtuosa and Viking Venus joined Iona in the UK ahead of all three vessels’ summer seasons.

From Monday (May 17), UK cruises can resume from England under step three of the roadmap out of lockdown.