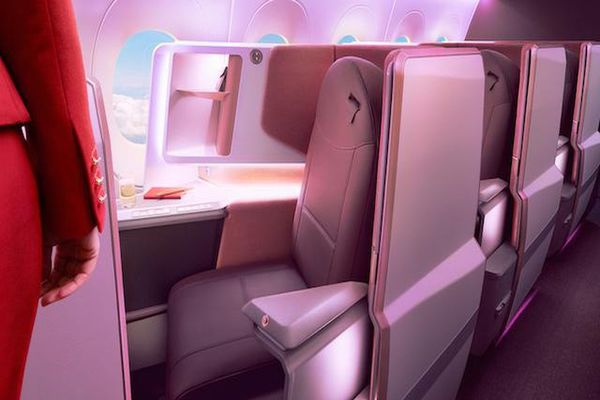 Virgin Atlantic is to deploy the first of its new Airbus A350-1000 aircraft on the Heathrow-New York JFK and Atlanta routes.

The airline is due to receive four of the long-range aircraft this year, with the first expected to arrive in August.

A further eight are expected to join the fleet by the end of 2021 as part of a $4.4 billion order.

They will feature a new-look Upper Class including a lounge area called The Loft, with a 32-inch TV, which replaces a bar that is incorporated in the existing fleet.

Forty four lie-flat seats on aircraft operating from Heathrow will be configured in a forward-facing 1-2-1 configuration in a change from the current herringbone layout. The seats convert into an 82-inch lie-flat bed.

The Virgin Atlantic premium-economy cabin on the A350s will be located behind The Loft with 56 seats across seven rows in a 2-4-2 configuration.

Each seat will have 38-inch pitch with personal power and USB ports as well as 13.3-inch entertainment screens controlled by passengers’ personal electronic devices.

The economy cabin will include 235 seats in a mostly 3-3-3 configuration with 31-inch seat pitch. A total of 36 seats at the front of the cabin will have 34 inches of pitch. All will have 11.6-inch TV screens.

Virgin Atlantic plans to operate A350s from both Heathrow and Gatwick as it upgrades its fleet.

The airline’s vice president customer, Mark Anderson said:“The introduction of our A350 represents a true evolution of our customer experience.

“We believe flying should be exciting, whether it’s your first or 100th flight with us and that’s why we’ve elevated our offering to provide our customers with something totally unique.

“The A350 forms a significant part of our fleet transformation strategy and by 2022, we’ll have our youngest, cleanest, greenest fleet in the sky as the aircraft transforms our customer experience, reduces our environmental impact and improves our route economics.”