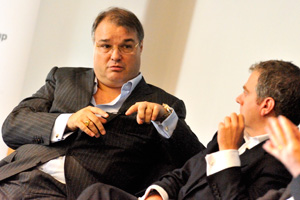 Monarch Holdings chairman Fabio Mantegazza has said he is prepared to talk to trade partners about adding much-needed capacity but warned it would come at a price.

Speaking to Travel Weekly after a briefing at The Travel Convention, he revealed he stepped in to shore up the family business with $150 million after it made its first-ever loss last year.

Mantegazza said he was happy to talk to anyone who wanted to work with Monarch following the collapses of key suppliers this year, but added: “It’s a question of price. There was a reason those flights [provided by operators who failed] were cheap. We are not going to go in and play a game that’s not suited to our way of doing business.

“The people who sold that capacity were extremely resourceful and ingenious but there was inherent risk, and we cannot expose ourselves to those risks.”

“Everything that could go wrong, went wrong,” he said.

“This year we are actually going to end up with a small profit in the UK. That was not the position we were looking at in May with the ash crisis.”

The turnaround has come after Monarch has undergone a restructure, which will see a new group chief executive, Conrad Clifford, starting in December.

Gary Anslow has been appointed as sales director for the group and will join on January 5, 2011.

Mantegazza said even though Cosmos was not profitable it was vital for the group. “Cosmos has played a part in our group that has not been understood. It is actually, for us, an important safety valve. I’m looking forward to it becoming profitable.”