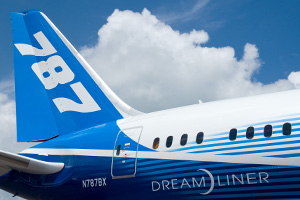 Boeing shook off troubles with the 787 Dreamliner by recording a 20% jump in first quarter profits.

Net income for the first three months of the year came in at $1.1 billion despite revenues declining by 2.5% to $18.9 billion.

Chief executive Jim McNerney said Boeing would resume deliveries of Dreamliners in early May after they were grounded in January due to battery problems.

This came amid reports that Ethiopian Airlines may become the first carrier to resume Dreamliner flights on Saturday.

McNerney said Boeing “worked around the clock to resolve the 787 battery issue while also successfully increasing production rates on the 737 and 777 programmes”.

He said: “Our first priority in the days ahead is to fully restore our customers’ 787 fleets to service and resume production deliveries.

“Our outlook for the year is positive, and our financial and delivery guidance is reaffirmed as we remain focused on the profitable ramp up in commercial airplane production rates.”

Boeing aims to have fitted most of the replacement batteries to the 787 fleet by the middle of May, McNerney added.

No estimate for the cost of the Dreamliner problems was provided.