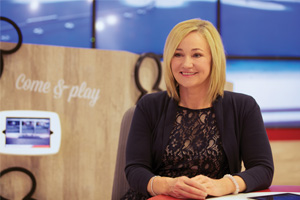 Sometimes the words in the English language simply aren’t enough. But in keeping with the innovation for which her company is known, Virgin Holidays boss Amanda Wills isn’t afraid to add a couple more to the lexicon.

Hot on the heels of last year’s ‘anarchonomy’ – the need to deal with customers who had lost faith and were happy to protest against big business – comes Wills’ neologism for 2013: ‘phygital’.

“Consumers are completely comfortable with digital technology now,” she explains.

The word, and the theory behind it, neatly encapsulates the vision behind the operator’s new holiday laboratories (just don’t call them concept stores), the first of which opened within House of Fraser in the Bluewater shopping centre in Kent last weekend.

“Some people think shoving an iPad in their shop makes them cutting-edge, but we were doing that two years ago,” says Wills.

“This takes it to the next level.”

There’s certainly no shortage of alternative things to try out in store, from motion-sensor technology that allows customers to literally pull together an itinerary, to a green screen where they can be photographed “on location” in a destination – all of which can be posted instantly on Facebook and Twitter.

The multi-sensory store, which Wills believes will be replicated in at least 30% of Virgin’s concessions and shops and could be rolled out in all of them “if our customers want it”, is paperless.

“You see adverts for companies who say ‘once you pick up our brochure, you know who you’re booking with’, but what does that mean to a 20-year-old?” she asks.

“I’m not a techie by any means, but in my bag I’ve got a BlackBerry, an iPhone and an iPad mini. There will always be customers who like a brochure, but if that’s still your starting point for attracting a customer, you need to wake up and smell the coffee.”

For those who think the mini putting green, the Disney dressing‑up box and the holiday scents that greet you as you arrive are gimmicks, Wills is unequivocal in her confidence that the new concept (sorry) will deliver.

“Our previous concession here brought in £4.5 million a year. I expect this to bring in £6 million or even £6.5 million,” she insists.

Virgin’s retail estate – including pop-up stores, concessions and four standalone shops – will total 110 by this summer, and accounts for 40% of the operator’s sales.

But while Wills credits the performance of the stores for a strong start to the year, she also insists that independent agents feature heavily in her distribution strategy.

“In total 20% of our sales still come through third parties. I’ve always been clear that we’ll work with those agents who want to work with us, and agents are good business for us as they sell with good lead-in times.”

The operator has had a strong start to the year, according to Wills, with a product mix that is becoming less reliant on the traditional Virgin strongholds of Florida and the Caribbean.

Wills says bookings are up 6% year on year and selling prices are also holding up well, though offset by rising operational costs. Florida summer 2014 bookings are up 20% on the same point last year.

The key destinations of Orlando, Las Vegas, Antigua and Saint Lucia continue to perform strongly, but Wills is particularly pleased with destinations such as Thailand and Dubai that are strengthening Virgin’s position as a global operator.

“More than 30% of our business is on what you might call non-Virgin routes,” she says. “The business is better segmented by cost, product, destinations and brands, and the Delta tie-up [Virgin Atlantic’s proposed joint venture] is very exciting as we can use that network too.”

So with business going well, a new advertising campaign on our TV screens and a new generation of shops being introduced, is it time to sit back and admire the handiwork? Apparently not.

“We are really focusing on the product now, and developing new concepts in our resorts that build on elements such as the V-Room and concierge lounges to really differentiate ourselves,” she says.

“You can buy a flight or a hotel anywhere, so whether it’s where you make your booking or the holiday experience, we have to keep looking for things to set us apart.”