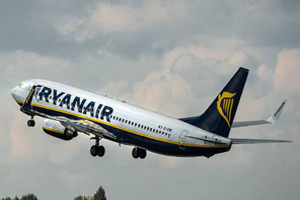 Ryanair saw quarterly profits soar by a quarter to €245 million as passenger carryings rose by 16% to 28 million.

The low cost carrier’s net profit increased by 25% in the three months to June 30 over the same period last year as carryings grew from 24.3 million as fares dropped.

The airline raised its full year traffic forecast from 100 million to 103 million with annual profits expected to be at the higher end of previous guidance of between €940 million and €970 million – up 12% on last year.

Chief executive Michael O’Leary said: “Our mix of low fares, best on time performance (91% in Q1) and enhanced customer experience under our ‘Always Getting Better programme, continues to attract millions of new customers.

“At the same time our focus on cost enables us to pass on lower fares to customers.

“Q1 average fare fell 4% to just €45, due to the timing of Easter, weaker April yields and lower checked bag penetration as more families and business customers enjoy discounts on their luggage or benefit from our free second carry-on bag policy.”

The airline agreed to sell its 29.8% stake in rival Aer Lingus to British Airways parent International Airline Group in the period.

“The timing of this sale is appropriate as our original plan for Aer Lingus – to use it as a mid-priced brand to offer competition at primary airports – has been overtaken by our Always Getting Better programme under which Ryanair has successfully entered many of Europe’s primary airports opening new routes and bases but offering competition and consumer choice,” O’Leary said.

“As the Ryanair brand develops and continues to grow strongly, the original rationale for acquiring Aer Lingus no longer exists.”

The carrier’s fleet will increase to 340 aircraft by the end of the financial year with the addition of 31 Boeing 787-800s.

Ryanair is due to open its sixth base in Germany in Berlin in September together with a base in Gothenburg.

A new personalised website us due to be introduced in October followed by new aircraft interiors and crew uniforms.