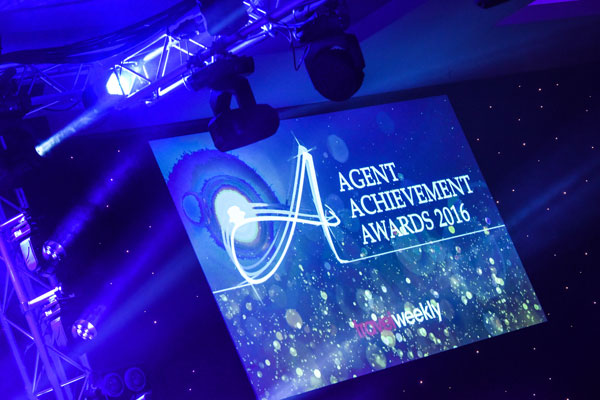 View our gallery of the night here

See how the night unfolded on our social wall

Three leading travel agents were honoured with the Outstanding Contribution to the Industry Award at the Travel Weekly Agent Achievement Awards on Wednesday.

The AAAs are the biggest celebration of the travel trade in the UK, with more than 850 people attending this year’s ceremony.

Renford Sargent, from Premier Travel, Jeanne Lally, from the Travel Bureau Gosforth, and Barrhead Travel’s Roddie MacPhee were presented with their awards at a ceremony at London’s Park Plaza Westminster hotel.

Outstanding achievement award winner Renford Sargent, Premier Travel group chairman, started as an agent in 1965 and bought the business in the mid-1980s. He said: “To be honoured by ones peers is a highlight of my career.

Roddie MacPhee of Barrhead Travel said “I feel quite dumbstruck. Never did I think that was on the cards, so to receive such an award from the industry…I feel very cherished.”

Commenting on the future of the industry, MacPhee said: “It looks very positive. Some of the quality products coming through are fantastic, especially cruise, luxury and long-haul.”

Jeanne Lally, of Travel Bureau, was also honoured with an outstanding achievement award.

She said: “I can’t believe it. I’m so honoured and humbled by this award. “I’ve been very lucky to work alongside some extremely knowledgeable people in this industry.

“I believe I have a great knowledge of the agent community and I’ve also been on the tour operator side too which helps me see things differently. “I’m so honoured and I can’t quite believe it.”

Big winners on the night included Thomas Cook and Baldwins Travel, which won the national large and small agency categories respectively having received the greatest number of votes from suppliers ranging from tour operators and cruise lines to airlines, tourist boards and ancillary companies.

Travel Weekly Group editor-in-chief Lucy Huxley, said: “The AAAs continue to go from strength-to-strength as we recognise the best agents and agencies in the country, whether they are on the high street, in call centres, online or based from home.

“The fact we had dozens of people on a waiting list is testament to the place the awards hold in the hearts of our agent readers and the suppliers who want to celebrate their best trade partners.”

In addition to awards for national and regional agencies, the AAAs also honours the best mainstream and luxury agents in the country, as well as recognising business excellence in the fields of marketing, social media and websites.

The 2016 awards were hosted by TV celebrity Stephen Mulhern alongside Lucy Huxley and Travel Weekly Group managing director Stuart Parish, with an array of entertainment and prize giveaways taking place throughout the evening.

She said: “This makes all the work and effort going through college even more worthwhile. I think it is down to enthusiasm and your attitude to working with the customer.”

Baldwins Travel won High Street Agency – Small Agency of the year award as well as London and South East England Small Agency. Joint managing director Chris Marks said: “This is phenomenal; a great achievement. We are very grateful for the support we get from our key suppliers but realistically this is all down to our team. The independent agent is a force to be reckoned with.”

On winning the regional award for London and South East England for the tenth time in a row, joint MD Nick Marks added: “This is a victory for all our staff and a huge accolade for our father Ron. The business is his ‘baby’ and is down to him; we are just taking it to the next level. ”

Angela McCall of Central England Co-Operative Travel said, “We have a very good relationship with suppliers and hold events with key operators and customers three times a year.

“We also have a fantastic team and work together, including two trainees who are very committed. We smashed our targets last year. We go above and beyond for our customers – printing out boarding passes and carry out welcome home calls. People don’t get that with the Internet.”

The full list of winners is below, and social media coverage from the night can be viewed here.

Leisure Agent of the Year
Gill Williams, The Travel Village